A Bodhi Way of Life

I sat down with serial entrepreneur and marketing consultant Paul Feeney to ask about his new venture - Bodhi, A Co-working slash Investment Centre with a difference.

Interview with the Founder of Bodhi, Paul Feeney by Sinead Walsh.

The Bodhi Co-Working Space will be situated on Altamount St, Westport, Co. Mayo.

You can apply for membership here

Co-working spaces have become a hugely popular way of life for many entrepreneurs, SMEs and corporate entities. They offer the routine of an office space, but with additional flexibility, networking opportunities and overall a more dynamic work environment.

Co-working is where you share a workspace with other business owners, employees and start-up companies. The idea is that you will naturally network, be inspired by and learn from those around you. However, the modern incarnation of this concept now includes larger and more established businesses too. Remote employees are now basing themselves in shared workspaces, as they are typically a much more productive work environment than your kitchen table.

When you examine the market in Ireland, you will find a diverse offering. Everyone, from start-ups operating on a shoestring budget to large teams from established businesses, can be catered for. WeWork, the world’s most recognisable co-working brand, has finally infiltrated the Irish market. Its most recent addition in Iveagh Court opened its doors in June of this year.

However, this trend is not just exclusive to the bright lights and overbearing glass buildings of Dublin. Ireland’s reputation for innovation and entrepreneurship extends beyond the capital’s borders, with cities like Cork, Galway and Limerick displaying an impressive ecosystem of startups. As such, the co-working market has begun to grow and adapt to its audiences.

In Westport, serial entrepreneur and marketing consultant Paul Feeney has decided it’s time to bring something different to the table. The ideals and ethos upon which he has founded his new venture, Bodhi - A Co-working slash Investment Centre, comes from seven years of travelling and working in over a hundred co-working spaces along the way.

Paul travelled through over 30 countries under the guise of 'Businessman to the Rescue', a digital marketing agency which helped clients increase their reach and revenue online.

The 3 pillars of Bodhi

The three pillars upon which Bodhi rests include; wellness, mentorship and building towards investment.

That mentality, the “investment-ready” frame of mind, is hard to come by in many young start-up companies, Paul believes.

“We don’t consider it as much as we should. We have parents, we have banks, we feel we have access to money. I don’t think we push young entrepreneurs to consider investment as much we should. It’s coming, but I just don’t think a young tech team in Ireland in their early twenties know how to be investible. Maybe they’ve got ambition and they know exactly what they’re doing, but there’s a huge skill in knowing how to present to investors. It takes months of work to be investable or to present a company in an investable way.”

The mentality Paul points to as an example of how it’s done is that of Indian entrepreneurs. During his year and half in India, Paul realised that the Indian belief of “go big or go home” was essential to survival.

With little or no hope of securing investment from banks or, in most cases, from family, business owners in India find themselves depending on investment from private quarters. As a result, ambitious plans for growth and market penetration are crucial.

“It’s the 10x mentality for investors,” explains Paul. “What good is giving them ten grand and getting back a hundred grand? Investors would much rather give the $100,000 and get back a million. The entrepreneur needs to figure out how he or she can open a hundred cafés in Bangalore as opposed to thirteen. It’s challenging, but they do it, and I think that’s a way of thinking we need to get into here in Ireland.”

The second pillar, mentorship, may seem inextricably linked with the overall concept of co-working, but it’s something that frequently doesn’t happen in reality.

“It will be job, passion and focus to get you standing on your own two feet as quickly as possible. When you’re in Bodhi, I will always be making you investable. This is essentially growing your business, but in a certain way, where you’re always thinking about stages and getting your company financially sound and ready to present to an investor. A day is going to come, whether it’s in 1 year or 3 when you’re going to get stuck. You’re ready to grow but you need capital, you need investment. I think that’s the tipping point where most businesses get stuck. They run out of money and don’t know how to get money. That’s where the mentorship and investment hub element of Bodhi comes in.”

Finally, the “wellness” aspect of Bodhi is not just a marketing tack-on to make it sound more appealing; it’s an essential part of making your business successful.

“When you’re growing a company, people don’t understand how stressful it can be. When you’re at any age and you decide to start a company, it’s very difficult for someone’s health to not deteriorate. You’ll be tired, you’ll be working through tiredness, eating bad, your sleep will be off and you’ll drink too much coffee. The stress builds up, so people will drink alcohol at the weekend to de-stress. I think it’s important that if you’re going into an office, like any job, to stay productive, you need to be healthy. If you’re a member of Bodhi, it’s my job to keep you sane and healthy so you can focus on your company. Exercise, diet and health will be an important part of Bodhi; basic things but once paying for membership in Bodhi, everything else is taken care of. You don’t want to eat porridge? Well, that’s what’s here. We’re not going to have pizza and donuts lying around.”

They say building a business is not just a job, but an all-consuming way of life. Perhaps it’s time that we look at the “productivity equals success mentality” in a healthier and more sustainable way. Following Bodhi’s lead could be the key to a more successful, balanced and beneficial way to live… even if it does mean cutting back on donuts.

Bodhi’s first incarnation will be based on Adelaide Street off North Main Street in the heart of Cork City and will open its doors for members in October 2018. If you’re interested in membership or want to find out more you can apply @ 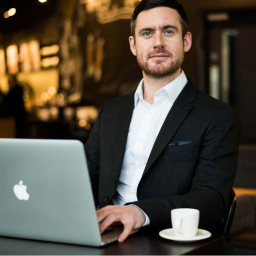 3 Reasons Why Your Business Should Be Blogging